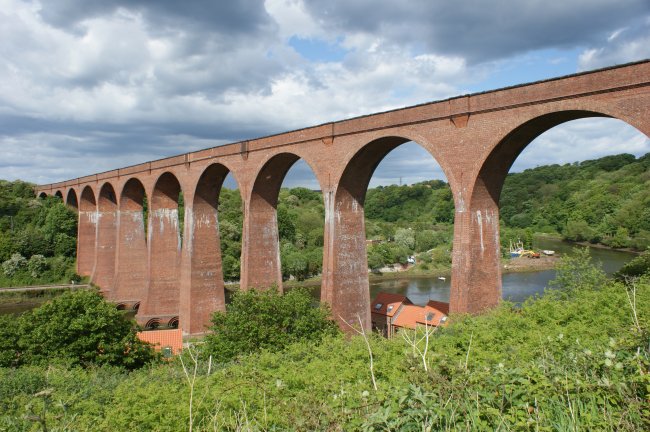 Whitby's remaining railway connection heads north, winding its way through the Esk Valley towards Middlesbrough where the line terminates. This is fine for a leisurely trip through some of Yorkshire's finest scenery, and it serves the local schools well too, but it's not great for rail journeys in other directions.

Whitby did have an alternate railway line, linking it with Robin Hood's Bay and then heading further south to Scarborough which was unforunately closed a few decades ago. However, a rail-enthusiast's loss is a walker's (or cyclist's) gain as the line is now a well maintained bridleway running all the way from Whitby to Scarborough.

From 1885 until its closure in 1965 the old railway line from Scarborough to Whitby took goods and passengers up and down the North Yorkshire coast. Now it's an off-road route through the North York Moors National Park for walkers, horse riders and cyclists.

In an act of great foresight, Scarborough Borough Council bought the line shortly after it closed. Because the track ballast was made from cinders rather than crushed stone, many locals call it the Cinder Track. It now forms 21 miles (34.4 kms) of Route 1 of the National Cycle Network.

You might decide to make a slight detour and visit one of the quiet bays such as Robin Hood's Bay, Crook Ness, Cloughton Wyke, Hayburn Wyke, Stoupe Beck Sands or Maw Wyke Hole. Or you could make a circular walk of it by taking in part of the Cleveland Way which follows a similar route along the cliff tops.

The route is well used by walkers, cyclists and horse riders alike and it's easy to see why. Why not stop for a pint at the Hayburn Wyke Hotel or for afternoon tea at the old station in Cloughton or the cafe in Ravenscar. Or you could hire a bike from Trailways at Hawsker and see more of the coastline than you might by foot alone.

You can explore our early industrial heritage at the Peak Alum Works - the birthplace of the British chemical industry - where locally mined rock was combined with human urine, brought up by barge from London, to make Alum which helps fix dye to cloth for the emerging UK textile industry.

You'll be confounded by the town that never quite was at Ravenscar. You can stop to wonder at the 13 spans of the 120 feet (36.5 metre) high Larpool Viaduct over the River Esk in Whitby. Or you may simply want to take a bit of time to enjoy the numerous sights and pleasures of Whitby, Scarborough or Robin Hoods Bay.

We highly recommend you explore at least a small section of the Cinder Track while you're in Whitby. Take a picnic and find a quiet spot to sit and relax. Or head off the beaten track and explore the footpaths and bridleways which fill the countryside in the surrounding area. You'll be amazed at the peace and quiet and the wonderful views you can find!